I have taken on the challenge to become better-read.

My post-college ambitions included waking up prior to six in the morning, hustling to and from the metro station and K Street, and arriving home post seven in the evening. Somewhere in the vortex that is city ambition and adulting, my love of reading became a forgotten and unnoticed lost indulgence.

Earlier this year I began a resolution with myself to read the classics that I hadn't studied in all of my schooling, an aspiration that directed me to an understanding of the immensities of content that I had sadly missed in all of great literature. I then willingly and dutifully led myself down the rabbit hole of a forlorn and obsessive quarter-life crisis; this steered me to a boundless search of reading content and a variant of book challenges, to which I then found one entirely too long and seemingly unattainable, which of course, by then, fit the bill instantly. Being an avid fan of the bookish Rory Gilmore, a girl who made smart cool, since Gilmore girls premiered like an after-school special on ABC Family (because I missed the WB years), I've taken it upon myself to become not only well-read but also well-directed in my endeavors.

Amy Sherman-Palladino created a truly fantastic, false-reality world that is the show Gilmore girls, which has created its own cult-like following. This brings me to the core of my choosing this particular challenge first, this show is brilliant. Gilmore girls exemplifies how brilliant ASP is, simply by how well the dialogue is written, and good writing comes from reading, and reading in mass. Alas, here I will postmark my reading challenge and contribute any synopses linked below from the books she purposely chose to include in each episode as props and character development enhancement.

According to Australian writer Patrick Lenton, there are 337 books captured from the complete seven seasons of the Gilmore Girls series. While I know that this list of 337 books is not absolutely correct in entirety, I plan to use the list as a catalyst and edit as I see fit. Although I would aspire to read them in the order they are presented, I am following along with The Rory Gilmore Reading Challenge on Goodreads. It presents a read-along and discussion every month on any listed book and also a chosen quarterly catch-up book. Follow my progress on my Goodreads account here. I plan to read each book with the group, but I am subject to pick up any listed book that strikes my fancy intermittently, including those from AYITL. The books are alphabetically organized below for reference.

2020 UPDATE: Click for the true, updated, and edited list here: The Gilmore Project. This page is dedicated to a correct and curated list of books as referenced and mentioned in the entirety of ASP's Gilmore girls. I have distinguished which authors, actual books, and movies are mentioned throughout the show for the most accurate list of all references. I have also signaled which books are physically read by each character and which movies were watched during the multitude of Gilmore movie nights. As a bonus, I also denote which textbooks are featured as they are seen. What can I say? I like to be thorough.

ⓡ = referenced book pertaining to general pop culture, no visual or mention of being read 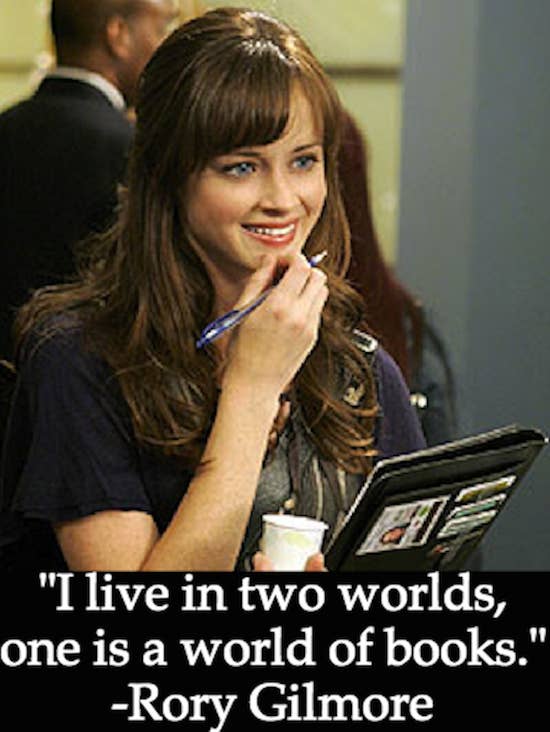 4.  The Amazing Adventures of Kavalier & Clay by Michael Chabon

8.  Anne Frank: The Diary of a Young Girl by Anne Frank

10.  The Art of Fiction by Henry James

12.  As I Lay Dying by William Faulkner

14.  Autobiography of a Face by Lucy Grealy

15.  The Awakening by Kate Chopin

17.  Backlash: The Undeclared War Against American Women by Susan Faludi

18.  Balzac and the Little Chinese Seamstress by Dai Sijie

24.  The Bielski Brothers by Peter Duffy

25.  Bitch in Praise of Difficult Women by Elizabeth Wurtzel

26.  A Bolt from the Blue and Other Essays by Mary McCarthy

30.  The Canterbury Tales by Chaucer

35.  The Children’s Hour by Lillian Hellman

37.  A Christmas Carol by Charles Dickens

38.  A Clockwork Orange by Anthony Burgess

39.  The Code of the Woosters by P.G. Wodehouse

40.  The Collected Stories by Eudora Welty

41.  The Comedy of Errors by William Shakespeare

43.  The Complete Poems by Anne Sexton

45.  A Confederacy of Dunces by John Kennedy Toole

46.  The Count of Monte Cristo by Alexandre Dumas (only mentioned as a sandwich!)

48.  Crime and Punishment by Fyodor Dostoevsky

49.  The Crimson Petal and the White by Michel Faber

50.  The Crucible by Arthur Miller

52.  The Curious Incident of the Dog in the Night-Time by Mark Haddon

53.  Daughter of Fortune by Isabel Allende

59.  Death of a Salesman by Arthur Miller

61.  The Devil in the White City: Murder, Magic, and Madness at the Fair that Changed America by Erik Larson

62.  The Dirt: Confessions of the World’s Most Notorious Rock Band by Tommy Lee, Vince Neil, Mick Mars and Nikki Sixx

63.  The Divine Comedy by Dante

64.  The Divine Secrets of the Ya-Ya Sisterhood by Rebecca Wells

71.  Ella Minnow Pea: A Novel in Letters by Mark Dunn

73.  Emily the Strange by Roger Reger

81.  Everything Is Illuminated by Jonathan Safran Foer

85.  The Fall of the Athenian Empire by Donald Kagan

86.  Fat Land: How Americans Became the Fattest People in the World by Greg Critser

87.  Fear and Loathing in Las Vegas by Hunter S. Thompson

89.  Fiddler on the Roof by Joseph Stein

90.  The Five People You Meet in Heaven by Mitch Albom

93.  Flowers for Algernon by Daniel Keyes

94.  The Fortress of Solitude by Jonathan Lethem

95.  The Fountainhead by Ayn Rand

101.  George W. Bushism: The Slate Book of the Accidental Wit and Wisdom of our 43rd President by Jacob Weisberg

104.  The Gnostic Gospels by Elaine Pagels

106.  The God of Small Things by Arundhati Roy

107.  Goldilocks and the Three Bears by Alvin Granowsky

108.  Gone with the Wind by Margaret Mitchell

110.  The Graduate by Charles Webb

111.  The Grapes of Wrath by John Steinbeck

117.  Harry Potter and the Sorcerer’s Stone by J. K. Rowling

118.  A Heartbreaking Work of Staggering Genius by Dave Eggers

119.  Heart of Darkness by Joseph Conrad

120.  Helter Skelter: The True Story of the Manson Murders by Vincent Bugliosi and Curt Gentry

125.  The History of the Decline and Fall of the Roman Empire by Edward Gibbon

127.  The Holy Barbarians by Lawrence Lipton

129.  The House of the Spirits by Isabel Allende

130.  How to Breathe Underwater by Julie Orringer

131.  How the Grinch Stole Christmas by Dr. Seuss

134.  The Hunchback of Notre Dame by Victor Hugo ⓡ

139.  Inherit the Wind by Jerome Lawrence and Robert E. Lee

141.  It Takes a Village by Hillary Clinton

146.  The Jungle by Upton Sinclair

147.  Just a Couple of Days by Tony Vigorito

148.  The Kitchen Boy: A Novel of the Last Tsar by Robert Alexander

149.  Kitchen Confidential: Adventures in the Culinary Underbelly by Anthony Bourdain

150.  The Kite Runner by Khaled Hosseini

153.  Leaves of Grass by Walt Whitman

154.  The Legend of Bagger Vance by Steven Pressfield ⓜ

156.  Letters to a Young Poet by Rainer Maria Rilke

157.  Lies and the Lying Liars Who Tell Them by Al Franken

164.  Lord of the Flies by William Golding

165.  The Lottery: And Other Stories by Shirley Jackson

166.  The Lovely Bones by Alice Sebold

170.  The Manticore by Robertson Davies

172.  The Master and Margarita by Mikhail Bulgakov

173.  Memoirs of a Dutiful Daughter by Simone de Beauvoir

175.  Me Talk Pretty One Day by David Sedaris

176.  The Meaning of Consuelo by Judith Ortiz Cofer

178.  The Merry Wives of Windsro by William Shakespeare

179.  The Metamorphosis by Franz Kafka

181.  The Miracle Worker by William Gibson

183.  The Mojo Collection: The Ultimate Music Companion by Jim Irvin

185.  A Monetary History of the United States by Milton Friedman

187.  A Month Of Sundays: Searching For The Spirit And My Sister by Julie Mars

188.  A Moveable Feast by Ernest Hemingway

190.  Mutiny on the Bounty by Charles Nordhoff and James Norman Hall

193.  My Life in Orange: Growing Up with the Guru by Tim Guest

195.  My Sister’s Keeper by Jodi Picoult

196.  The Naked and the Dead by Norman Mailer

198.  The Namesake by Jhumpa Lahiri

199.  The Nanny Diaries by Emma McLaughlin

200.  Nervous System: Or, Losing My Mind in Literature by Jan Lars Jensen

203.  Nickel and Dimed by Barbara Ehrenreich

208.  Notes of a Dirty Old Man by Charles Bukowski

212.  One Flew Over the Cuckoo’s Nest by Ken Kesey

213.  One Hundred Years of Solitude by Gabriel Garcia Marquez

214.  The Opposite of Fate: Memories of a Writing Life by Amy Tan

216.  Oryx and Crake by Margaret Atwood

218.  Our Mutual Friend by Charles Dickens

219.  The Outbreak of the Peloponnesian War by Donald Kagan

223.  The Peace of Nicias and the Sicilian Expedition by Donald Kagan

224.  The Perks of Being a Wallflower by Stephen Chbosky

226.  The Picture of Dorian Gray by Oscar Wilde

227.  Pigs at the Trough by Arianna Huffington

230.  The Polysyllabic Spree by Nick Hornby

232.  The Portable Nietzche by Fredrich Nietzche

233.  The Price of Loyalty: George W. Bush, the White House, and the Education of Paul O’Neill by Ron Suskind

234.  Pride and Prejudice by Jane Austen

243.  Reading Lolita in Tehran: A Memoir in Books by Azar Nafisi

253.  Romeo and Juliet by William Shakespeare